Wingspan Arts and The New Group will combine for Summer Programs in 2023! Details and applications are available below!

The Wingspan Arts Summer Conservatory is a tuition-free, audition-based program for middle and high school students. Offering a true conservatory experience, this program combines both classwork and an in-depth rehearsal process culminating in full-scale theatrical productions.

The Wingspan Players is for incoming 6th-8th grade students interested in musical theatre. Students take fundamental performance classes and focus on large cast, ensemble-based musical productions. In past years, the Players have performed shows such as Shrek, The Wiz and Zombie Prom, among other beloved musicals.

The Wingspan Ensemble is for incoming 9th-12th grade students invested in broadening their theatrical skillset. Students take a wide variety of specialized classes, focusing on both skills building and exposure to the professional arts world. In production, Wingspan Ensemble students are cast in either a musical or a play. Show selections feature smaller casts, more challenging material, and offer more opportunity for student involvement in the creative process. In past years, the Ensemble has performed shows such as Merrily We Roll Along, Ragtime, Twelfth Night, The Heidi Chronicles and The Laramie Project.

Joining us in Summer 2023, The New Group, the Tony-award winning Off-Broadway theater, will offer their popular program SCENE 1 for our Wingspan Ensemble members during the electives. SCENE 1 features New Group teaching artists that provide students with rigorous skills based courses in acting and writing; and the opportunity to participate in a cohesive ensemble of performers.

Applications are now open and can be accessed through the link below. Please note the following requirements:

Students in grades 8-12 explore new and classic Musical Theatre songs not only as singers, but actors as well. Working with a musical director, director and choreographer, students develop and rehearse a musical theatre revue. Culminating in a performance at a professional theatre space, the class gives students the experience of putting on a professional-level performance. Often, students are selected to perform at Wingspan events throughout the year to showcase their work. The Troupe is a great opportunity for summer conservatory students to continue honing their craft, and for new students to be introduced to Wingspan Arts.

We are always so proud of our students and their accomplishments! Check some of them out below:

Matt Amira (Wingspan Student 2001 – 2007) has appeared in numerous professional productions since studying at Wingspan Arts. He has starred in Fiddler on the Roof at The Goodspeed Opera House, South Pacific at Asolo Repertory Theater in Sarasota Florida, and Jersey Boys at Ogunquit Playhouse. Matthew also starred as Robby in the National Tour of Dirty Dancing and is currently performing in the North American tour of Beautiful.

Catherine Blades (Wingspan Student 2007-2008) has appeared on Broadway in Round About’s revival of Bye Bye Birdie in 2009. She has also starred at the Goodspeed Opera House in Hello! My Baby and Hello Dolly. Catherine also has made guest appearances on TV’s Blue Bloods, What Would You Do?, and had a recurring role on Season One of Netflix’s Jessica Jones. She can also be seen in the feature film Hard Sell starring Kristin Chenoweth and Katrina Bowden.

Sofia Bryant (Wingspan Student 2012 – 2018) stars as Dina in the hit Netflix show I Am Not Okay With This. She will also be starring in the upcoming film, Mark, Mary, & Some Other People. Sofia has also appeared on television shows such as Blue Bloods, The Good Wife, and The Code.

Annelise Cepero (Wingspan Student 2010 – 2013) has starred in numerous regional theatre productions around the country. She has also made appearances on various television shows and in short films. She will make her feature film debut as Provi in the upcoming Steven Spielberg remake of West Side Story.

Jackson Demott Hill (Wingspan Student 2013 – 2018) has been in several independent films, short films and commercials. He was seen as a Powder Monkey in the Opera Billy Budd at BAM and Jon in A Doll’s House also at BAM. He made his Broadway Debut in Finding Neverland as George and Peter. Jackson has also appeared on numerous television shows, such as The Marvelous Mrs. Maisel.

Aneesa Folds (Wingspan Student 2006 – 2008) toured the country in Ragtime as Sarah’s Friend. She has also appeared in numerous shows at regional theaters in the Northeast including the Mac-Hayden and the Goodspeed Opera House. She has starred off-Broadway in both Sistas the Musical and This One’s for the Girls. This fall she made her Broadway debut in Freestyle Love Supreme.

Luke Islam (Current Wingspan Student since 2017) was a Julianne Hough’s Golden Buzzer on Season 14 of America’s Got Talent and made it through to the semi-finals. He also appeared on the AGT Champions Season 2. Luke will be starring in the upcomig Disney+ series, The Mighty Ducks alongside Emilio Estevez and Lauren Graham.

Christian Navarro (Wingspan Ensemble Student 2008) starred as Tony Padilla in Netflix’s hit show 13 Reasons Why. He has also appeared in HBO’s Vinyl as well as Amazon’s The Tick. Christian has also worked on the big screen in movies such as Bushwick and Can You Ever Forgive Me, starring Melissa McCarthy.

Casey Watkins (Wingspan Student 2015 – 2018) toured the country as Duffy in the Annie National Tour and as Nancy in the A Christmas Story National Tour. She also appeared in an Emmy Award-winning episode of Season 2 of Netflix’s Master of None as Young Denise.

Alexander Weiss (Wingspan Student 2010-2013) was crowned the first ever US Masterchef Jr. While we didn’t teach him how to cook, we are still very proud of this huge accomplishment!

Zoe Wilson (Wingspan Student 2013-2015) has appeared in various webseries, including Nickelodeon’s Roast Beef and Roger. She has also performed in shows at The Broadway Westchester Theater and off-Broadway in The Butterfly’s Day, The Transport Group’s Three Days to See and their concert version of Peter Pan, and in The Pill at La Mama. She also appears in Season 5 of Netflix’s Orange is the New Black.

Our students have gone on to study at:

Tisch School of the Arts, NYU

University of Cincinatti–Conservatory of Music

University of North Carolina School of the Arts

How competitive is this program?

The answer to this question changes year to year depending on how many students apply. On average, we audition 75-100 students each year and accept 20-25 new students.

Those numbers make me really nervous—I’m new to this. Should I bother applying?

ABSOLUTELY! We strive to accept students across all ability levels—from talented beginners to experienced professionals.

Will late applications be accepted?

Where is the program located?

We are still in the process of finalizing our location for this summer. We anticipate returning to Beacon High School, located on 44th Street between 10th and 11th Avenues. We’ve been at this school for several years and look forward to continuing the partnership.

How many students are in the program?

I hate musical theatre and only want to do a straight play. Can I choose to just sign up for the play?

Unfortunately, no. If you are applying for the Wingspan Players (middle school), all students will be cast in a musical. If you are applying for the Wingspan Ensemble (high school), all students are cast in either the play or the musical. Students do not get to choose where they get cast. If you are only interested in being in a play and will be miserable if you are cast in a musical, this may not be the program for you. We believe it is important for all of our students to stretch themselves and often ask them to work outside of what they are normally used to doing in an effort to expand their range and experience.

I love theatre but I am not a performer. Do you have a program for students interested in working on the technical side of theatre?

This is something we can absolutely consider! If you would be interested in joining us as a technical theatre student, please contact us via the contact link below and we can discuss the possibility. This opportunity, however, would only be for someone currently in High School. We could not make accommodations for a Middle School technical theatre student at this time.

Can I apply to the program if I do not live in New York City?

Absolutely! We have had students from all over the country (and even from other countries) in the past. If it is not possible for you to come to New York City for an audition, please contact us and we can discuss your options for the audition. Please note, however, that we do NOT provide housing or transportation so you would need to organize that on your own.

Who should I ask to write my recommendation?

This recommendation can be from any teacher. It does not need to be a performing arts teacher. Choose someone who knows you well and can give us a sense of your work ethic, ability to work with others and anything else you think we should know. Teachers must fill out the TEACHER RECOMMENDATION FORM by the application deadline for you to be considered.

What is a personal statement?

What monologue should I choose?

There is a wealth of resources online to find monologues. You can also look at Drama Bookshop or the Lincoln Center Library for plays and monologue books to pull from. As long as it is about one minute in length, we do not care where it comes from!

What song should I sing?

We would prefer that your song be a musical theatre song, but that is not required. We do, however, ask that you bring sheet music for whatever song you choose to sing. Again, looking online is the easiest way to find this sheet music. You can also visit The Lincoln Center Library—it has tons of sheet music that you can copy. Ultimately you should choose something that you feel comfortable singing and that highlights your talent!

Should I prepare the whole song?

It is a good idea to know the whole song, but we will ask you to sing just 16 measures of it. So please have a starting and ending place prepared before you come in for your audition.

I am not a singer; do I still need to perform a song in my audition?

Yes. Everyone must sing even if you do not consider yourself a singer. Just choose a song that you can sing and feel comfortable performing!

Can parents come to the audition?

Of course. Parents are more than welcome to come to the auditions. We will actually give everyone another overview of the program before auditions happen. Parents, however, will not be allowed into the actual audition.

How long are the auditions?

The actual audition is only a few minutes, but the whole process can take up to 45 minutes or so. 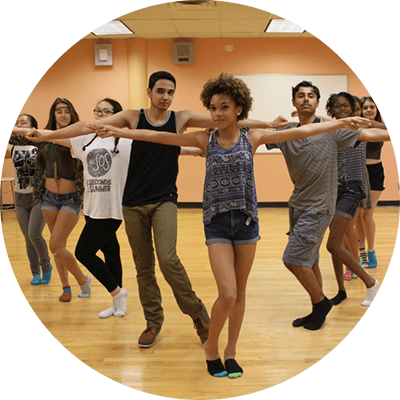 Wingspan is the most open place and I am glad to be here. You let everyone be who they want to be and then we come together as one to do what we all love to do, which is theatre.